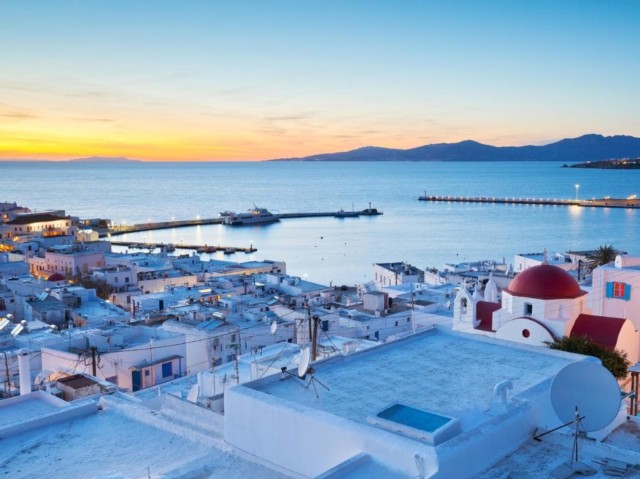 The port of Mykonos is the pearl of the island.
The most beautiful view of the Aegean Sea, however is on the water.
By chartering boats and yachts you can take in the magnifcant scenery.

This Island is a little paradise for party goers, many go there for its crazy nights out, aswel as its must-see establishments and its shopping.

There is also the Church of Panaghia Paraportiani, an assembly of 5 different churches, in the neighborhood of the kastro.

It is the largest of the 400 churches and chapels present throughout the island. Its typical architecture is a mixture of popular Byzantine and Western elements.

But also the windmills of Mykonos (Kato Myli), are one of the most recognized monuments of Mykonos and are part of the symbols of Greece.


Then the small Venice which is located in the district of Kastro. The houses of one to two floors were built right by the sea with their balconies overhanging the water. These enabled the captains to get to their boats more quickly.

This area is also known as Alefkandra (because this was the area where women from Mykonos came to wash their clothes).

There are also museums like the Archaeological Museum, it features marble sculptures, ceramics and jewelry recovered from the islands of Delos, Mykonos and Rhine.


Then the Maritime Museum of the Aegean presents the models of a collection of ships from the pre-Minoan period to the nineteenthcentury and marine and ancient objects related to the history of navigation in Mykonos.

And last but not least, the Museum of Popular Art, housed in a former captain's house in the "kastro", with a collection of furniture, embroideries, icons, sculptures and popular musical instruments dating from the last century .
To enjoy the city and e its port several days, go to Easy Bed Booking and book your hotel.